Hamza Belmellouki
Hamza(@HamzaLovesJava) is a self-taught developer and Java enthusiast. In his free time, he likes to blog about various technical topics
Posts Working With Nulls in the Java Ecosystem
Post
Cancel

Working With Nulls in the Java Ecosystem

A null value can appear anywhere in a Java application. In this post, we’ll see how to work with data you control as well as data you don’t. We’ll also discuss how we can use annotation libraries like JSR 380, Spring annotations, Lombok, and some patterns to handle null values.

Java’s built-in assert keyword can be used to check for assumptions. It can be a handy utility to check for nulls:

The above example checks if the argument of foo is null. If it does, then it will fail by throwing an AssertionError with a message: Exception in thread "main" java.lang.AssertionError: List is null. To enable assertion checks in your code, pass -ea as an option when running your code:

If you don’t, Java will ignore all the assertions in your code. Typically, developers enable assertion checks when they’re in development and disable them when deploying to production.

Normally we use assertions if there’s a programming error. But what if it isn’t? An If/Else statement can be leveraged to handle this case:

Introduced in Java 7 along with other static helper methods in Objects class. Object.requirNonNull() checks that the specified object reference is not null:

Java 8 added other methods in the Objects class that can check if the object is null and vice-versa. You may prefer to use these method to increase readability and avoid typos:

Data outside of your control

We can classify data in our application into two types; Data that we can control(Internal Data) and data that is outside of our control(External Data). This section and the following one shows you the best practices you can do when dealing with these kinds of data.

Typically the presentation layer(controller) is the one responsible for getting data from the client. Therefore the data we’re getting is outside of our control. In there, the controller has the responsibility for checking for null values. Follow these practices when dealing with external data:

Data that you control

For the data that you control, remember that you shouldn’t try to pass a null value to a method. For example, the method bar accepts two arguments. The first one is mandatory, and the second one is optional. Instead of passing a null value into the second parameter, overload the method bar to two methods. One that takes a single parameter, and the other takes both of the parameters(mandatory and the optional). That way, you won’t need to worry about passing null values to method arguments:

Another thing to remember is never to return a null value in a method. For that, you can use the null object pattern. For example, if your method returns a Collection. Instead of returning null, you would return an empty collection. Or you can use the Optional type as it provides a clear and explicit way to communicate the message that there may NOT be a value without using null.

Finally, having a good suite of tests will definitely help you detect programming bugs caused by nulls.

There are third party annotations that will help you handle null values. However, in Java, there are no standard annotations to handle nulls. Static analysis tools can leverage annotations to analyze your code at compile-time to detect a null violation error. Other annotations may throw an exception at runtime if the null condition is violated. In this section, we’ll be looking at how to handle nulls using different libraries.

Numerous null safety annotations were introduced in Spring 5.0. They are located in org.springframework.lang package. They can be used by static analysis tools and IntelliJ inspection tools to inspect code and generate errors and warnings at compile-time.

Spring’s @NonNull annotation is used to check that the value passed to the parameter cannot be null. It can be leveraged at parameter, return value, and field level. To get null violation compile-time errors/warnings in IntelliJ, you’ll need to add the annotation to IntelliJ’s inspection tools. To do that go to Preferences | Editor | Inspections and search for @NonNull/@Nullable problems and in the options section click Configure Annotations and then add Spring’s @NotNull annotation from org.springframework.lang package. Now, whenever you set null in name’s setter method. IntelliJ will generate a warning telling you that the specified setter should not accept null in its parameter. This example demonstrates how the use of such annotation:

The above example is a simple Java POJO class. Spring’s @NotNull annotation is used to forbid null values in Person’s name field. If you got this test method in IntelliJ, it would generate a warning telling you: Passing 'null' argument to parameter annotated as @NotNull:

Likewise, @Nullable can be used to declare that annotated elements can be null under some circumstances.

The above example specifies that all parameters and return values inside com.example.demo package are considered to be non-null by default. Note that you can override this for a specific parameter or return value by annotating them with Spring’s @Nullable annotation.

Known as Jakarta Bean Validation 2.0, is a set of constraints as annotations. Besides @NotNull constraint annotation, it provides others as well: @Email, @NotEmpty, @NotBlank, @Positive, @PositiveOrZero, @Negative, @NegativeOrZero, @PastOrPresent etc. You can leverage these annotations at any layer in your application. Typically you would validate your data upon creation/update of a resource in the Front layer of your application. If you’re working in Spring, all you have to do is annotate your POJO class with the constraints and annotate the method parameter with @Valid annotation. In case if a constraint is violated, a ConstraintViolationException is thrown.

If your project is based on spring-boot starter validation, it will bring a dependency of Hibernate Validator, which is the reference implementation for this specification.

Lombok is a library used to reduce boilerplate code for data objects by generating getters, setters, constructors, hashcode, and toString, among other things. Lombok works as an annotation post-processor. It generates code and injects it into the application. If Lombok’s @NotNull annotation is put on a parameter, Lombok will insert a null-check at the start of the method/constructor’s body, throwing a NPE with the parameter’s name as a message. If put on a field, any generated method assigning a value to this field will also produce these null-checks.

In Lombok, we can configure which exception to be thrown in case of passing a null value. Also, the flag usage, whether compilation should generate an error or a warning.

The null object pattern can help us deal with the numerous null checks in our code. Our code may have many if statements checking for an object’s nullability; thus, code becomes ugly and hard to read. You may also get various null pointer exceptions by forgetting to add a null check for your objects. The null object pattern can help by encapsulating the object’s nullability logic in your object, resulting in a clean, elegant, and safe code. 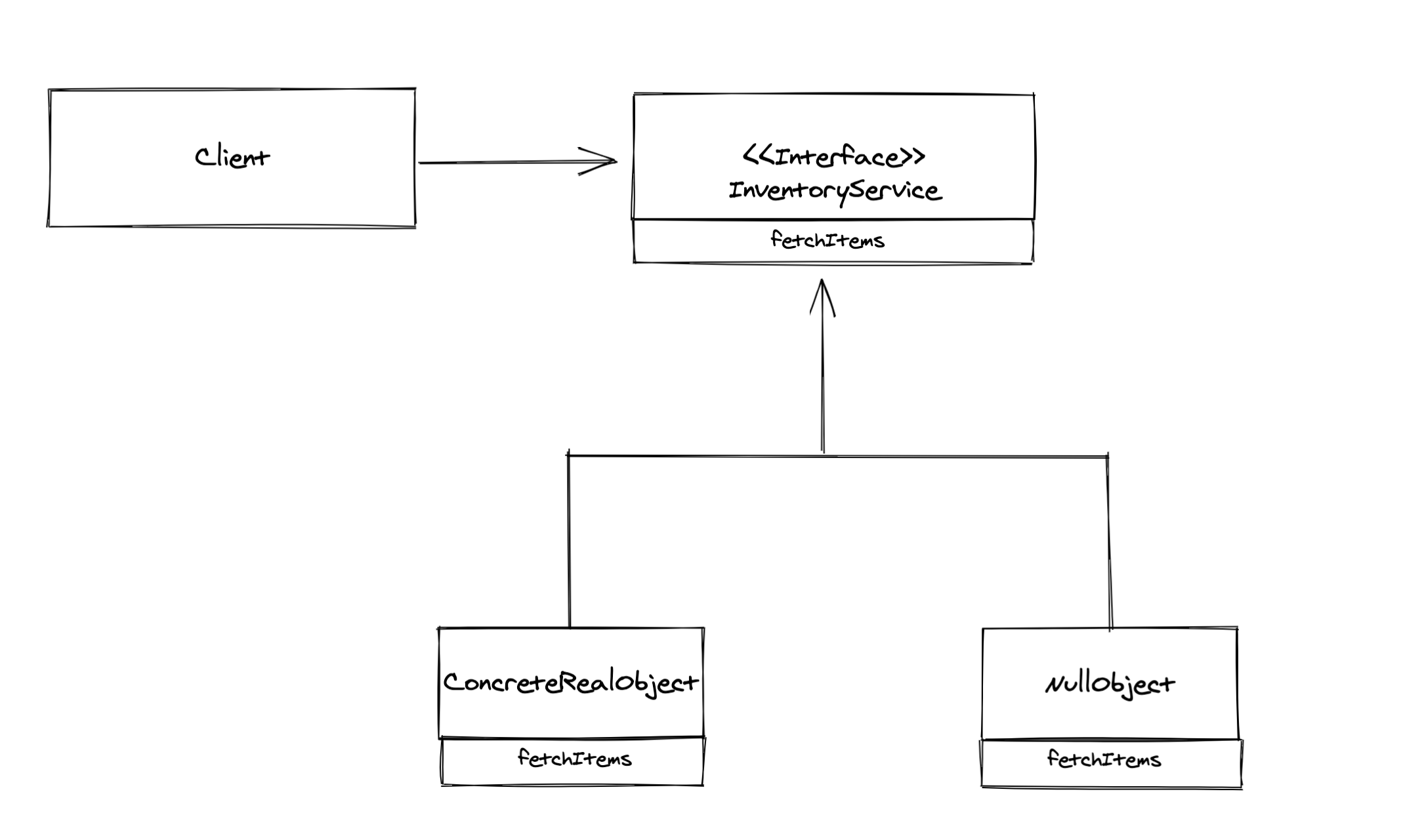 In this example, InventoryService is the interface that defines the contract for fetching items. Its method returns a collection of items. ConcreteRealObject implements that interface, which does the fetching logic maybe some processing and transformations too. NullObject is also an implementation that may stub fetchItems method by returning an empty list or some other default values.

It is recommended to leverage the null object pattern when a default value can be assigned or a default action can be taken. Please do not use it when you don’t know what a default value or behavior might look like. Doing so might introduce subtle bugs in your code. So be careful and use it when appropriate.

Optional instead of null

Typically, when developers cannot return an actual value, we tend to produce a null or throw an exception in that method. Java 8 added the Optional type, which is an immutable container object that may or may not contain a non-null value. An Optional can hold at most one value or none(null). We can leverage its API to handle the presence and emptiness of value.

One thing to note about Optional is that they make clients aware that the API might return a null value, and this is the key difference between returning an Optional or a null value. It’s easy to forget or ignore handling an API return value if we were returning null.

In this example I am populating a list of users using a static initializer:

Here, I have a method that searches a user by its name. Instead of returning a null, I am returning an Optional so the client code that’s calling the method can react to the value’s presence or emptiness.

As you can see, orElseThrow method returns a User if the user’s name is “John”. Else, a NotFoundException exception is thrown. There are other numerous handy Optional methods that you’ll likely wanna use: isEmpty, ifPresent, map, orElse, etc. The best way to learn about them is to go and explore the API at the Javadoc.

In this post, we’ve seen how nulls can make our code unpleasant to work with. Also, we’ve looked over some modern best practices and patterns you can implement when working with nulls.
If you have any feedback on this post. Please, don’t hesitate to reach out to me or just say a “hello” on Twitter.

What is Thread safety? To save you the time from looking up to Wikipedia here is the definition: Thread safety is a computer programming concept applicable to multi-threaded code. Thread-safe co...